This Skull Tower in Serbia was raised by Ottoman troops under general Hurshi Pasha following the crushing of a revolt in 1809, where the rebel leader Stevan Sinđelić in the face of certain defeat as enemies flooded the rebels' position, ignited his gunpowder store and blew his own forces apart rather than face impalement as a punishment for rebellion. The heads of the rebels were then collected by the victorious troops, skinned, stuffed and sent to the capital, and then sent back to Niš. All in all 952 skulls were built into the facade of a mortared tower as a monumental warning to the locals to toe the line and not challenge their distant ruler. Today only 58 skulls remain in the 4,5 m high tower, the gaping sockets remaining in their neat horizontal rows.

Sharing here in case someone gets inspired for some modelling scenery creation! 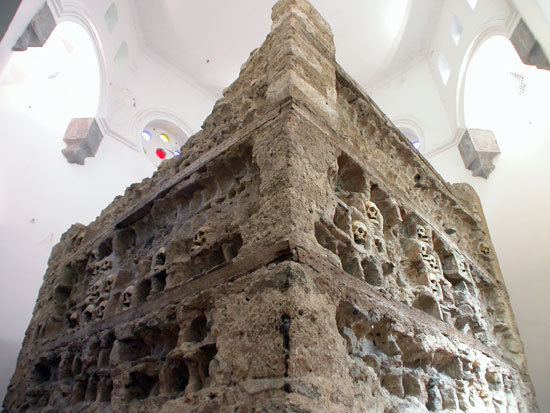 Re: Skull Tower of Niš

Inspiring... for The Empire of Sigmar and their obsession with skulls.
Thanks for sharing, I ha no idea it existed.
Winds never stop blowing, Oceans are borderless. Get a ship and a crew, so the World will be ours! Today the World, tomorrow Nagg! {--|oBrotherhood of the Coast!o|--}
Top
Post Reply
2 posts • Page 1 of 1