Humans, being a sickly lot with much more to gain from living in cleared-out plains near rivers and coasts, are not great fans of wetlands. Apart from some sacrifices, particularly in Celtic cultures, marshlands are generally an unproductive wasteland and den of unsavoury wildlife, disease and parasites. A place to hide out in during times of war, and something best drained (at great effort and cost) and made better use of during times of prosperous peace.

Elves, being resistant to disease and of an artistic mindset to admire nature in its manifold shapes, would not necessarily share this view of wetlands. On the contrary, Elves since the dawn of time would have observed that marshes and bogs are soft watery places where nature is particularly bountiful in its sprout of bringing forth vegetation and wildlife (including mosquitoes, flies and even Orcs and Goblins, but not all life is pleasant). How could these wetlands be anything else than expressions of the feminine force, the euphemistic wells of Mother Nature, the most female of landscapes on Earth?

Elves would be particularly prone to appreciate the rich bird life of swamps, not least swans, and this include for purposes of egg-snatching wherever and if such is done by Elven youths. 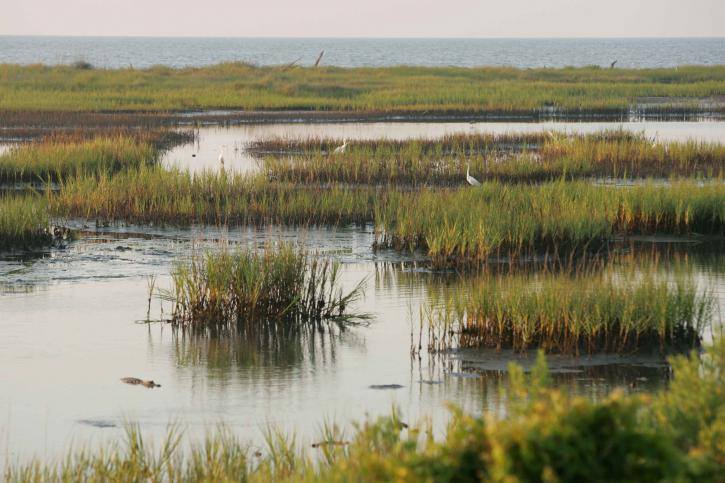 As such, there may be taboos persisting even in urban Elven cultures against draining marshlands, dumping rubble into swamps (but perhaps not organic waste?), and building them over with rude causeways. In Elven lands, wetlands may well be left alone even in breadbasket plains, with city walls skirting marshes at some length (not too shabby part of the defense, see Ravenna) and with roads curving around marshlands or, if need be, travelling above them on elegantly arched viaducts. While marshes are not the most aesthetically pleasing features of the natural world, Elves would nevertheless see a value, that Humans do not do, in preserving bogs to a large extent. You may well find some respectfully placed half-overgrown Elven-crafted stone statues or sleek stelae out in a marshy nowhere, at some spot where some Elf thought that this artwork would decorate the surroundings like a gemstone adorns armour.

Dread Elves or even Sylvan Elves, if prone to sacrifices, could very well sport traditions running after the cycle of the seasons, where they lead and prod a male animal (e.g. stallion or slave) into a deep bog where the screaming victim sinks into the swamp and drowns in the embrace of Mother Nature: A union between male and female to re-energize life itself in the world.

Conversely, Orcs and Goblins would have a much ruder view on swamps, but still connect them to bodily nature. You could well hear marsh Orcs exclaim, when declaring their home: "I grew up in my armpit!"

Re: Elven Views of Marshlands

Thanks for this bucolic view!
Winds never stop blowing, Oceans are borderless. Get a ship and a crew, so the World will be ours! Today the World, tomorrow Nagg! {--|oBrotherhood of the Coast!o|--}
Top
Post Reply
2 posts • Page 1 of 1