The possible future of Twilight Kin (dark elves) in KOW

Discuss the art of war for the Dark Elves and the inferior races that dare to oppose them here.

The possible future of Twilight Kin (dark elves) in KOW

I don't know if this is the correct subforum, apologies if I posted in the wrong one.

First some background : When Mantic started the public beta test for the second edition of Kings of War, all armies from 1st edition were available at the start except for one, the Twilight Kin, their "evil elves" army.

The problem was that Mantic was not satisfied with their existing theme, background and gameplay, as their elven part was too close to the normal elven list and the rest of the army was mainly some demons from the Legions of the Abyss army.

While this same general idea had worked rather well for the abyssal dwarves, the darves made it work with their own units like the golems and the abyssal part was unique, with things like the halfbreed and grotesque (~bull centaurs in cavalry and large cavalry versions)

As players still wanted to play dark elves in KoW, Mantic released a temporary army list (that was also beta tested with the others so the list is balanced) that is still available to download as a PDF, but not printed in any book for now.

The plan was and still is to release (probably later this year or more likely early next year) a supplement that will include 3 new major factions, one for each alignement, the evil faction being the reimagined Twilight Kin army.

As Mantic has not yet started really working on this supplement, it's still too early to know what the final version of the army will be exactly, and this has made many dark elves players warry of jumping to KoW fully for fear of seeing part of their army become obsolete with the new version.

There have been however some recent infos about an idea that seems more and more likely to be used for the final version, were the theme of the Twilight Kin would switch from "abyssal elves" (elves + demons) to elves thematically aligned with the new "night stalker" army from the uncharted Empires supplement, meaning that the final list would be something like "elves + nightmare creatures".
(And as part of the night stalkers existance comes from the destruction of an elven city during the fall of the gods, elves where already linked to the nightstaler fluff)

This would bring an interesting developpement for the army, link the nightstalkers with a major faction of the Mantica world, and open the way for new ideas and units.

As a bonus, many demons models can also make fairly decent night stalker units (especially with a dark or glooming paint job).
And of course at worst you could still ally demons to your evil elves if you really wanted to continue using them.

As I said, this is absolutely not final yet and the idea might change again, but it's very likely that this will be the new theme of the Twilight Kin, so I though that the information might be of insterest to fellow dark elves players.
Top

Awesome to hear. I've signed up for a 2 hour KOW demo at GenCon this year, and I will test and see how I like the system and the general flavor of the rules. Depending on how that goes, it is highly possible I will watch the developments of this army list with a lot of anticipation.

Thanks for the update!
Chinese Relativity Axiom: No matter how glorious your triumphs, nor how miserable your failures, there will always be at least one billion people in China who don't give a damn.

Thanks for posting Jtrowell. Nice to see you popping over from the Mantic forums.

Currently there is a small player base for KoW on this forum. I think I am probably the most active tournament player here but there are other posters who frequent both forums currently.

Obviously as Mantic has their own forums, most of the KoW discussion is there rather than in race specific forums from WFB, which is a shame as more traffic here is always welcome.

I had hoped to engage the community a little more when we have at least some more details to discuss and work with. I am on the same page as yourself that it will be TK and Nightstalkers, rather than Abyssal and have already started up my new plog based on this.

I think the Northern Alliance might also be of interest when in development. Although noted as a 'Good' faction. Elves with Ice magic, northern men, Ogres and trolls etc sounds like something I can also work with.

All in all I am really looking forward to getting some input going when the first Beta lists are released.
My Kings of War Plog - Forces of Nature

The northen Alliance is indeed something that might have a great potential for former dark elves players.

While the army is technically good in the Mantica world, the presence of Ogres mercenaries, northen human allies, as well as various snow/ice creature (trolls, maybe also things like yetis or snow/ice giant ?) mentionned in the small fluff that we already have can indeed make their rules perfect for an evil aligned elven army.

Plus I have the theory that their king might have found some remain of Winter power to explain his success, maybe some kind of artefact or part of her essence, meaning that we might have a good faction whose core power comes from the remains of an evil god, and I like this idea even if it is only based on a small phrase in the rulebook saying that their elven king was not very remarkable before his exil making other wonders how he managed to create and lead such a powerful alliance.

Back on Twilight Kin, I hope that the RC will include something like a dimensional portal or shrine so we get appropriate rules for the Bloodwrack shrine and/or cauldron of blood, with the dimensionnal nature of the nightstalker it would make sense to have something like that after all.

If they do a public beta I will certainly mage the suggestion.

Waiting patiently to hearing more from Mantik version of Dark Elves.
Thanks for the update.
Winds never stop blowing, Oceans are borderless. Get a ship and a crew, so the World will be ours! Today the World, tomorrow Nagg! {--|oBrotherhood of the Coast!o|--}
Top

Love the news.. I'm very curious about KoW. But I confess I still haven't found any players around me

I love me a bowl of numbers to crunch for breakfast. If you need anything theoryhammered, I gladly take requests.

Furnace of Arcana, a warhammer blog with delusional grandeur.

"I move unseen. I hide in light and shadow. I move faster than a bird. No plate of armour ever stopped me. I strike recruits and veterans with equal ease. And all shiver at my coldest of whispers."
- The stiff breeze
Top

Daeron wrote:Love the news.. I'm very curious about KoW. But I confess I still haven't found any players around me

Same here. I'm trying to get some people into it. Hopefully I can get a trial game in this weekend.

I already have a Beastmen army I'm converting over to a Herd list and I've very curious to see what they do with Dark Elves. I just found a new Tyranid army from years ago in my closet and am looking at using it as the basis for a small Night Stalkers force.

I'm slowly making my way through the 2nd edition rulebook and so far I'm liking what I see. So incredibly simple to learn.
Count them:

Apologies about the thread necromancy, but as we finally have some news on the original topic I think that it was more appropriate that starting a new thread.

In summary, after the recent global Kings of War campaign, it is now confirmed that the Twlight Kin (the Dark elves in the Mantica world) will indeed be aligned with the Nighstalkers (nightmare transdimensionnal creatures) and not the abyssals (traditionnal demons) as they are in their current temporary list.

This was already rumored but back when I posted the original message it was only one *possible* (but popular) idea that Mantic had for the revamped Twilight Kin, it is nice to see that they retained the idea.

We don't have yet a date for the book that will include the new Twilight Kin (plus the Ophidians and the Northen Alliance) for KoW, but Mantic has just started a Kickstarter for a skirmish game set in the same settings, and this KS will serve to finance the first official nightstalkers models and we have seen concept art for some models for the Northen Alliance too, so it's strongly suspected that like how the second Deadzone KS helped pave the way for the Warpath KS, that Vanguard might be planned to do the same to prepare for the 3 new major armies.

Sure, most models for Vanguard will be gameboard plastic (like the Walking dead plastic), but some will be high quality resin and they plan to do at least two new hard plastic sprues (a new basilean men at arms sprue to replace the awful mess that the current version is) and a scarecrow sprue (basic fodder in the nightstalker list) 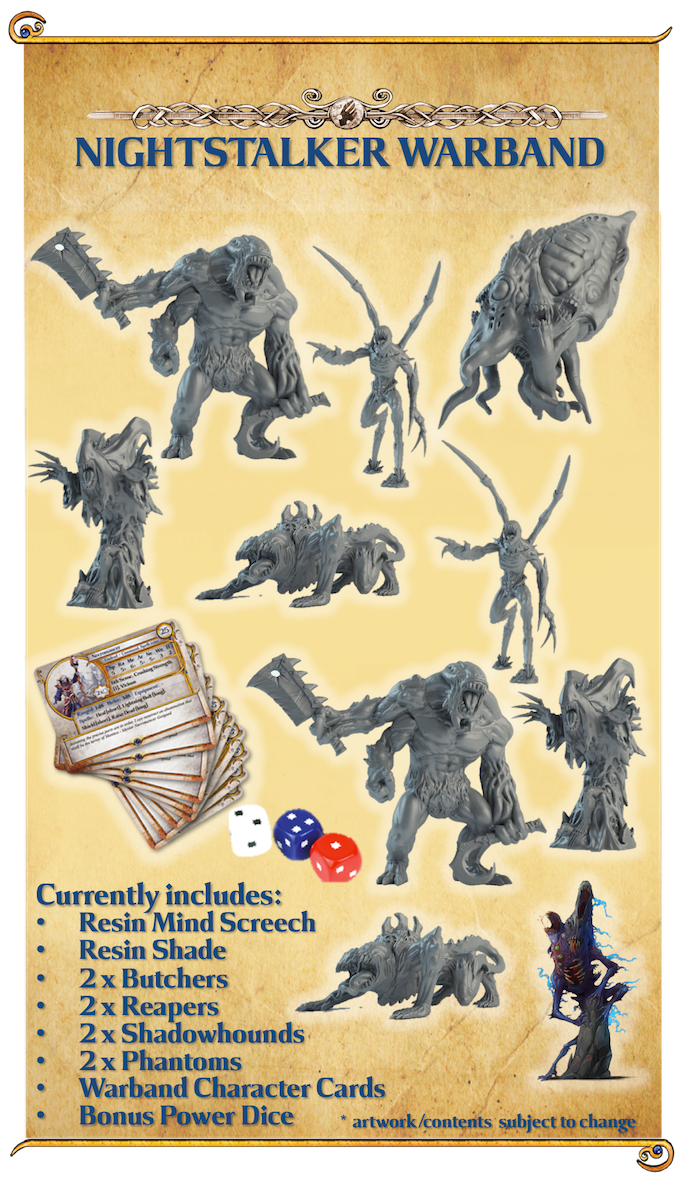