Discuss the art of war for the Dark Elves and the inferior races that dare to oppose them here. 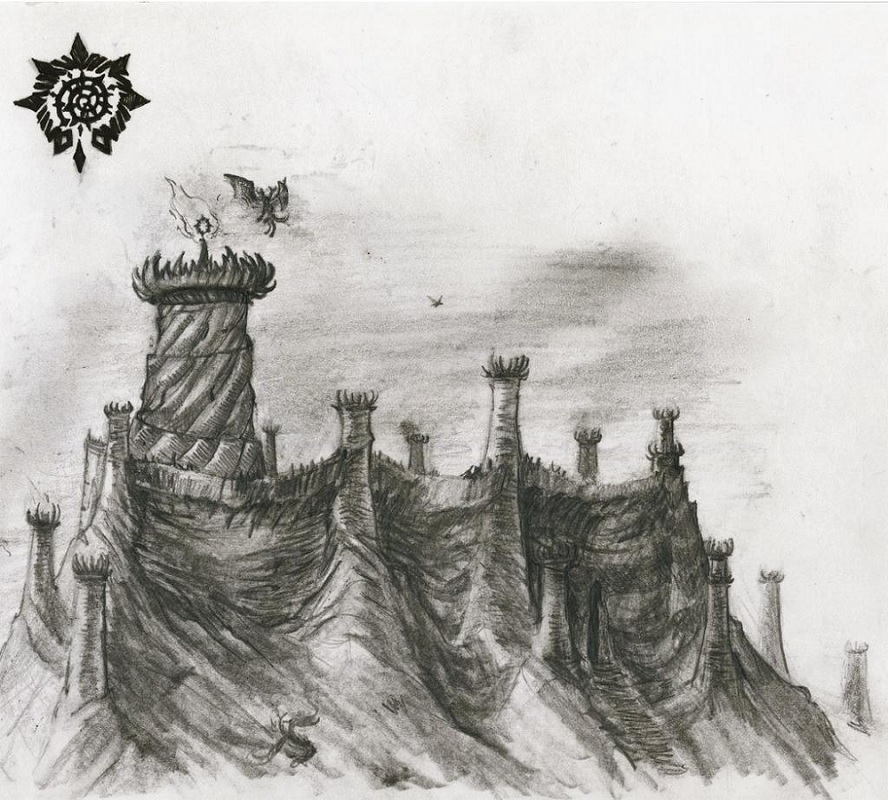 The hold is constructed upon the ruins of an ancient structure built by Old Ones. The demon Be'lakor, and the labour of slaves assembled the Citadel, most of which died, upon his leaving the island it came under the control of the wizard Ternoash, who visits on occasion but leaves in the hands of his many puppets. It is hidden deep in the Chaos tainted North, nigh impossible to find in the heavy mists and treacherous bogs that surround it, and even when you do find it, what will you do but despair? The walls are woven with lead, and the central tower is completely metal while twisted abominations created by the Deceiver lurch and flap between the ramparts. While the demon Be'lakor was able to garrison and arm the citadel to the brim, it is still powerful without him. 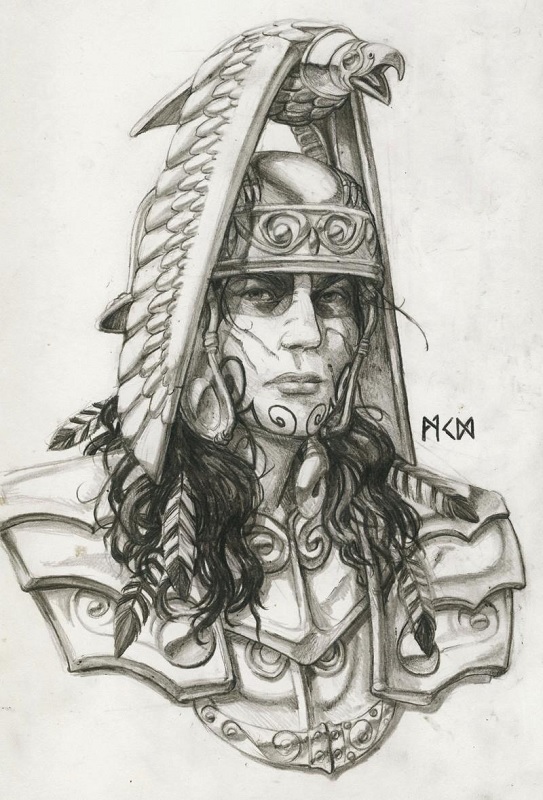 Buddug is the great eagle riding archer, Chief of the Toulenii.

I wanted to redesign her helmet as it is the personality of the character and I felt that the original was too generic. and I wanted to draw her for fun. 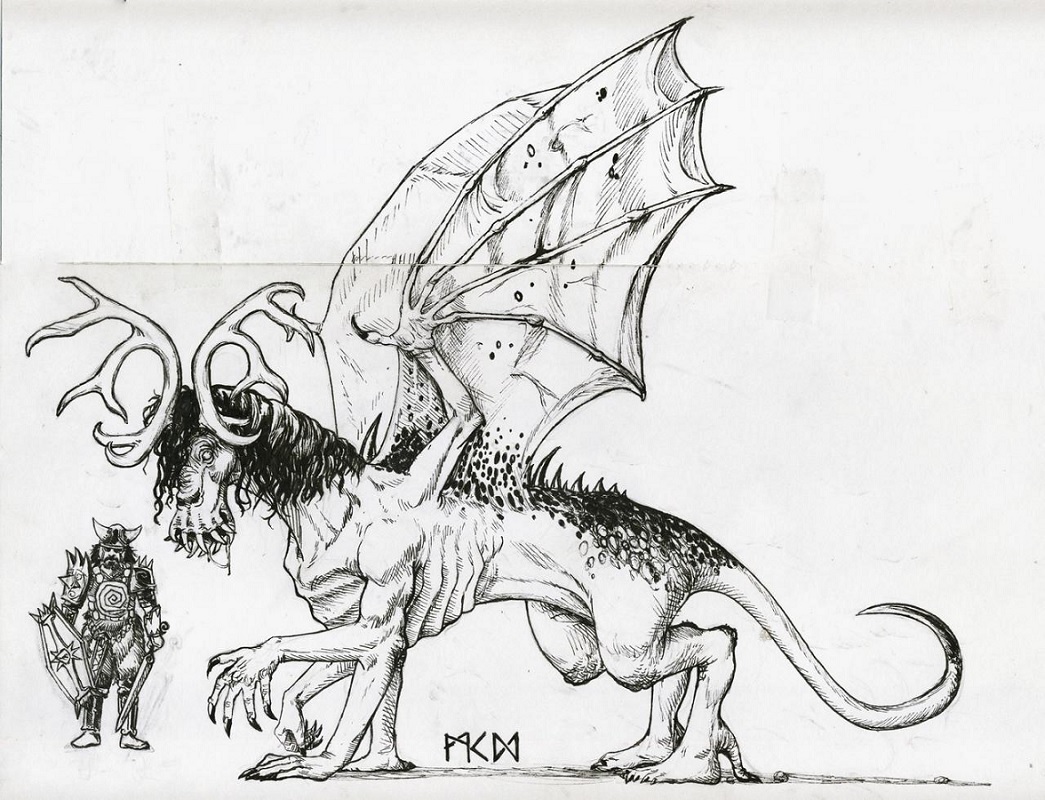 Matthew Klaas de Witte wrote:All chaos followers actively seek the favour of the Dark Gods, and yet they are fickle with their "blessings" coming in many awful forms, most of the time the negative outweighing the positive. Within the North of Albion the mist-laiden bogs contain secrets that should not be found and many who seek its power return forever translated into mindless mutants of a myriad of shapes.

Ternoash is a wizard of exceptional power, and such Tzeentch has granted him the gift to bestow mutations upon subjects. This is done within his massive cauldron in the central tower of the Citadel of Lead, and is one of the only "sure" ways of gaining powers via mutations. That said, perhaps asking "The Deceiver" for power by hopping into a mutagenic cauldron inside a dread citadel is not the most intelligent course of action. Very few if any return with cognitive ability above that of a simple beast, thus they become enslaved to Ternoash.

Carnyx of the Gods 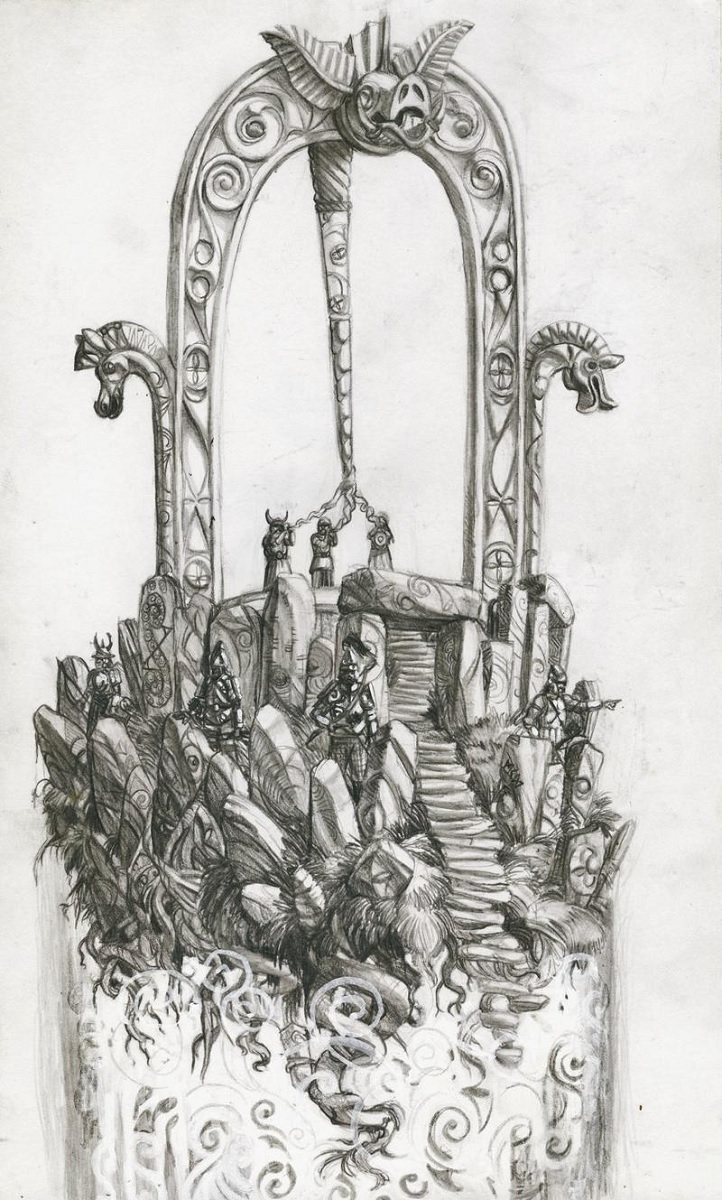 The Carnyx has immense magical properties, it is as rare as it is powerful and so is the magic woven into the earth that suspends it across the field of battle. The massive instrument must be held up by arms of arcbronze laden with gold, and played by three individuals. It confers immense strength unto its allies, the mere sight of it rallies men to the most lost of causes.

I wanted to bring in a carnyx, but I didn't want it to be the same as the cornu I already depicted. So I made it really really big. But how would it be held? It would need something to hold it up. After I figured out the type of stand for it, it took me many drawings to figure out how it would be brought to the battlefield. Originally on a chariot, but I had enough of drawing them for now, and I felt that it was getting repetitive. I remembered that Karl Kopinski painting of Karl Franz fighting a giant, with the floating towers in the background and it gave me an idea to make a floating henge-hillock of sorts suspended by magic. This took about a week to properly flesh out the idea working between that and other art and fighting a cold.

This map has been shared by Lord Agragax of Lunaxoatl over on Lustria Online: 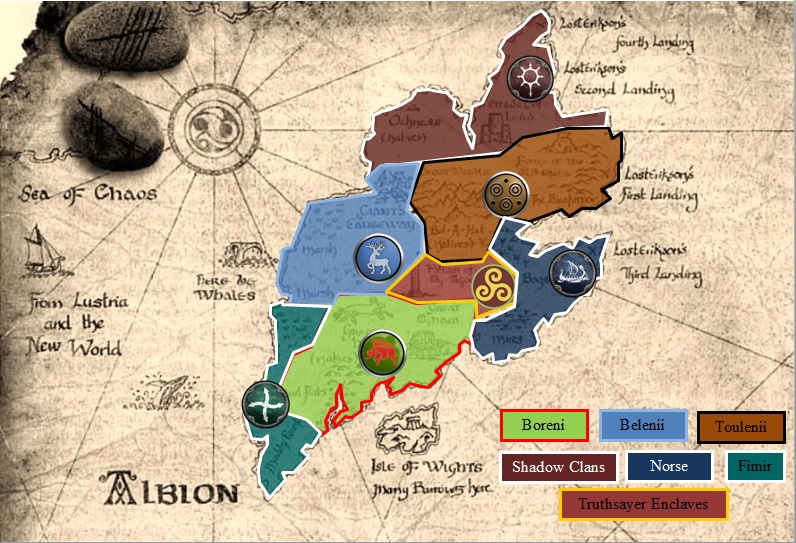 Lord Agragax of Lunaxoatl wrote:As Matt hasn’t created any Albion artwork of late due to other projects, to keep this thread going I’ve been working on a map of Albion and the various factions on it, based upon one that @Warden made for his Dragon Isles Samurai Clans in one of his lore threads (here). I’ve included all three of the major tribes that Matt has devised, plus territory that belongs to the Truthsayers as I thought they would have the same level of power the Druids had over the actual Celtic tribes (I would say akin to that which the Pope possessed over the various countries of Medieval Europe), surviving enclaves of Fimir (as I found that some of them still live on the island), the armies of corrupted tribesmen that follow Be’lakor (which I’ve called the Hordes of Shadow or Shadow Clans) and the Norse, as they’re portrayed as controlling much of Albion in Warhammer: Total War and I thought it would provide continuity to replicate some of that.

The emblems were all borrowed from Rome: Total War, Rome II: Total War (in the case of the Truthsayers emblem) and Warhammer: Total War (the emblems for all three of the evil factions here are Norse faction emblems in the game, but I thought the green one would be good for Fimir because of the central ‘eye’ in the middle of the four Chaos spikes, and the Chaos star would be appropriate for Be’lakor’s corrupted clansmen)

I’ve decided to revise my map to acknowledge this segment of Matt’s feedback:

I’ve incorporated the Great Ogham into Boreni territory and swapped the positions of the Belenii and Toulenii around to give the Belenii access to the Tower of Llenog (which actually isn’t on this map but on a similar more detailed version is present in the region I’ve given to the Belenii, between the two lots of marshes).

Lordofskullpass over on EEFL has written the first Albion army list, based on de Witte's work. Check it out!

[quote=lordofskullpass]For a long time I've been avidly following the development of a certain Matt Klaas de Witte's interpretation of the island of Albion, as I think it's far better than the version GW developed in the Dark Shadows campaign of yesteryear. Additionally, for the past year-ish I have been developing my own unofficial army list for this version of Albion, so that those who are fed up of GW's cavemen and Matthias Eliasson's fantasy Highlanders can play an army of proper Iron Age Celts for a change, as the Celts were at their most powerful and advanced during the La Tene period, which could have lasted much longer had it not been for everyone's favourite Latin-speaking xenophobes and copycats bringing such new-fangled nonsense as 'discipline', 'uniform' and 'mass murder in gladiatorial arenas' to ancient Europe. So, without further ado, I present to you the first draft of my Albion army list for Warhammer Fantasy 8th Edition!

Beyond the Old World and the 'civilised' lands of Bretonnia and the Empire lies the island of Albion, the birthplace of mankind. Those who travel there believe it is nothing more than an island of mists, bogs and ancient ruins, yet are oblivious to the fact that it is home to an advanced civilisation even older than the desert kingdoms of Nehekhara, who possess secrets taught to them by the Old Ones themselves. Proud tribal Overkings lead their people in a neverending war to not just survive, but thrive, against such abominations as the monstrous Fimir, barbarous Norse and, worst of all, the savage and bloodthirsty warriors enslaved by Be'lakor, the first Daemon Prince of Chaos. At the sonorous call of Carnyx warhorns, rank upon rank of brave, honourable warriors charge across the field, with nimble cavalry and deadly chariots sweeping along the flanks and mighty constructs infused with the power of the earth ploughing into the foe. The mystical wards of the Truthsayers and the divine predictions of the Oracles fuel the strength of their sword-wielding brethren, while the myriad shock troops of the island's tribes deal the hammer blow that crushes the enemy advance once and for all. While the colonies of humanity to the south languish in decadence, poverty and greed, the first of its nations battles endlessly to keep the world safe from the foul taint of Chaos.

This army consists of a combination of units and characters devised by Matt, some created based upon my knowledge of real-world ancient Celtic tribal armies and additional units inspired by GW's interpretation to retain at least a semblance of faith toward GW's source material. As with my Swarms of the Hive Mind army list I have tried to maintain a combination of balance and thematic fun in the unit choices and profiles, though this army will require extensive playtesting by myself and others before true balance can be achieved. All my unofficial army lists aim to reach the 'middle tier' of balance in the Warhammer Fantasy rankings, because the game is more fun if all armies have their own strengths and weaknesses, and I attach the first draft of my Albion list below:
drive.google.com/file/d/1u3l6Ph_doPiS8VpGGV5K96XvyBVefTkn/view?usp=sharing[/quote]

The moral, legal, spiritual, and cultural guides of the people of Albion are also powerful mages. But only those that hold any sway on these aforementioned institutions on the isle are a part of the mysterious Circle of Truthsayers, a hierarchy of individuals headed by The Seven, The Three, then The One, in that order. The Seven are not of little note, they hold great sway on the island and are active in its politics. The Three are the heads of each sanctioned discipline of magic Light, Life, and the Hunt, with the foremost being Life, seen as the most benevolent. The One is Draoiorix, the most powerful being on Albion, The Formless One.
Though they practice the same disciplines as other races only 3 are sanctioned by Circle Truthsayers. It is possible to practice others but they are only discovered on your own and not taught by The Circle. The only possibility to gain proficiency is to seek outside assistance. If one does go on the path of another discipline of magic, you will be exiled from The Circle, you may still fight for Albionic tribes, a chieftain will likely not refuse such help, but it comes at the cost of losing this grand connection to the most powerful group in Albion.

Spells used on here are not like any other because the island is isolated, thus, it did not develop along the same path as the outside world. Though some may closely resemble those invoked by other races it is purely a coincidence.

You may practice other forms of magic openly, though it is frowned upon by the Truthsayer aristocracy. You may not practice these forms if you want to hold any position of power or be included in the Order of the Truthsayers. It will cause you to be immediately expelled if you are caught, and even if it happened in the past. This is a large reason for some to leave the order to become mercenaries, heretics, and outcasts. Though it must be added that there have been good and noteworthy men and women who have used magics of other forms to benefit Albion and its tribes. But those who dabble in these magics, combined with their spurned nature oft turn to Chaos, becoming Dark Emissaries.