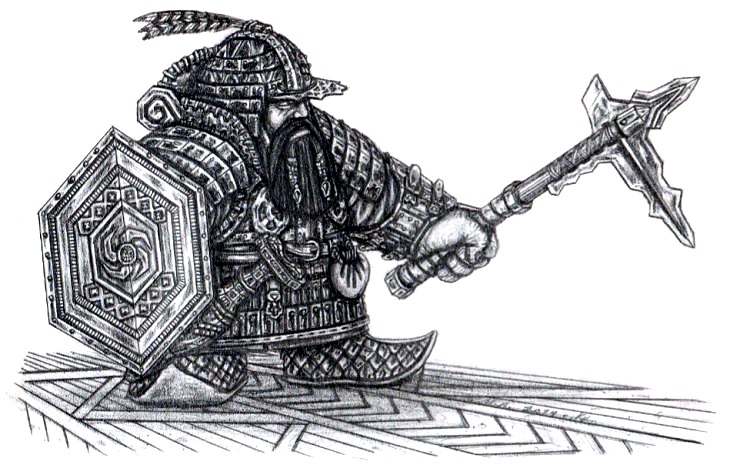 As was discussed here, let's propose T9A to have both a fantasy Human Korea (quite much a given, to be expected) with a few Dwarven Holds in its numerous mountains (not a given). Let's pick Aseadal as a working name for this land, for the moment being; by taking Asadal (the name for the mythical first Korean city, founded by [url='https://en.wikipedia.org/wiki/Dangun]Dangun[/url], a God-King descended to Earth) and inserting "ea" from the end of Korea for a mash-up. In the concept drawing above, the Dwarves of Aseadal Peaks take aesthetic cues from both Korean bronze age culture (especially the Liaoning type dagger), and the ironworking Gaya confederacy (42-562 A.D.) of the Three Kingdoms era, with its famous plate armour suits. The hexagonal shield shape is borrowed from Baekje, contemporary of the Gaya in the peninsula. 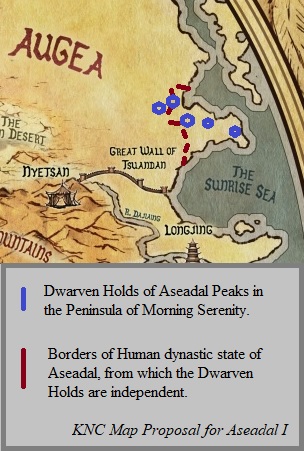 To distinguish the more heavily armoured Dwarrows of T9A's fantasy Korea from the proposed Sky Foothill Dwarves, all Dwarven Holds within Aseadal ought to be independent of the Human kingdom surrounding them, as is the norm for isolated Dwarven Holds elsewhere in the world. Having Dwarven Holds within the borders of Grand Tsuandan be subject to the Human Emperor is one way to play up the sheer exceptional power of Tsuandan (able to cow even Dwarves bunkered up in their heavily fortified highland Holds, and thus field some Dwarven auxiliaries in her armies), while the Aseadal Dwarves face a normal separated situation visavi the Humans around them.

Please share your ideas, comments and criticism for this background proposal, folks.

Uther the unhinged on CDO had these ideas to share:

Uther the unhinged wrote:The Korean’s famed for archery therefore the dwarves would need to counter this. One way is heavy plate armour. Another would be wall shields (stretched hexagonal). They would need missile weapons too. To distinguish them from other dwarves maybe no set firearms but hand held miniature rockets launched along a wooden track like a cross bow without the bow. You could have a series of these ranging all the way up to large rocket batteries. Crossbows too could be used but stylistically with Korean heavily recurved bows. Maybe phalanxes of spear wielding heavy infantry protecting rocket batteries and lines of heavy armed half held rocketeers. You could convert crossbowmen with removing the bows adding a rocket and a backplate behind it. These guys would need beard plates and face armour. Possibly the stylised face plate of late shogun era. They would need protection from the air... what about leaders on winged Kirin? Magical horned winged goats of the Mountains.
The independence of these holds could be maintained similar to the Swiss of the 16th century. Too much effort to conquer and happy to be hired as mercenaries by the empire to the west. Whilst acting as a barrier to that empires expansion into the human lands of the peninsula to the east