Tribes of the northwest Barren Mountains

Tribes of the northwest Barren Mountains 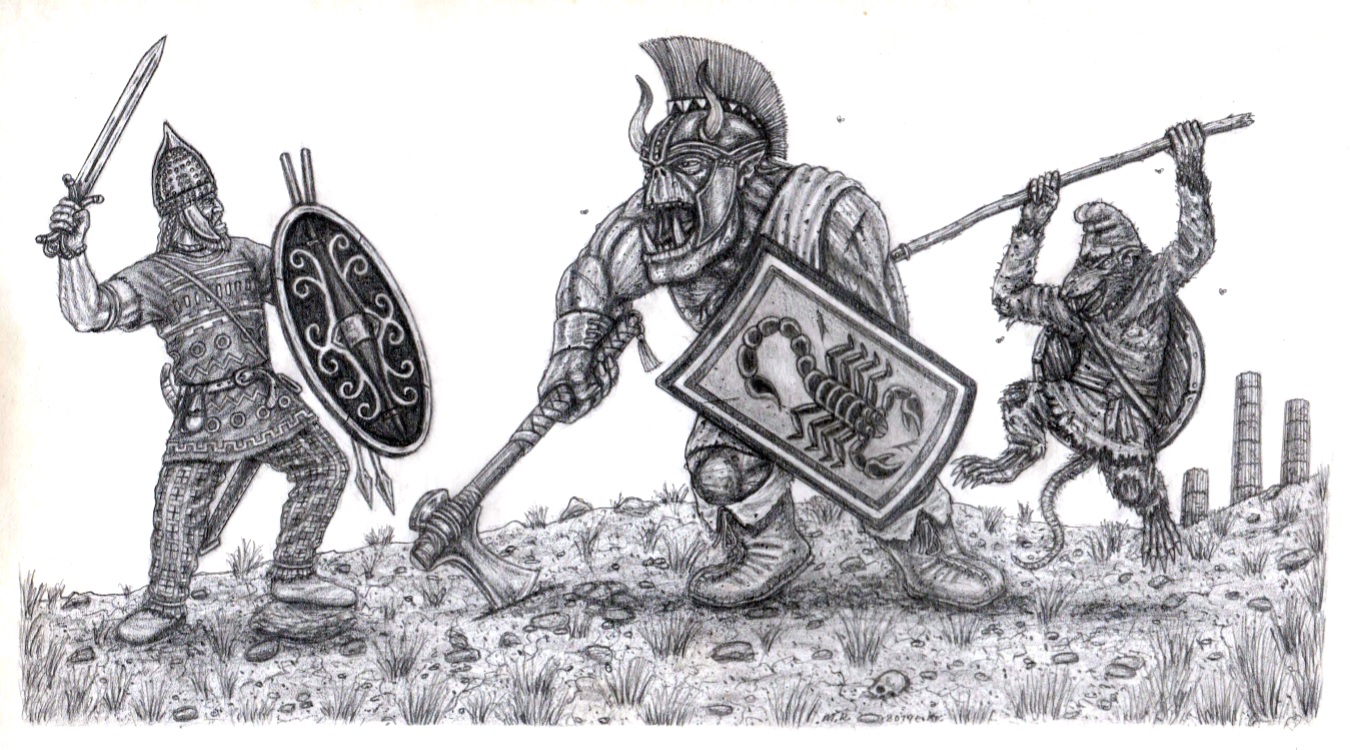 The Caucasus Mountains are famous for harbouring many different peoples since ancient times, with tribes barely being in contact with the others in the next valley. While the open steppes of Central Asia provided the perfect stomping grounds for nomadic conquerors to forge new peoples through an ethnogenesis of the winners take it all (for as long as they keeps winning), mountainous Caucasus instead provided shelter for the weak, and preserved them for long ages in highlands which were hard to access and easy to defend.

In the Ninth Age world map, we may note that the Barren Mountains project straight west across the peninsula which we for the moment will call Minor Augea, terminating but a short distance from Avras (it is warmly recommended to check out the environs of Avras map by HKYUGOK). Taking a cue from the Caucasus' conserving effect and taking it two steps further, it may be proposed that the Barren Mountains host a plethora of different tribes and realms (the strongest of which would be the Hittite-equivalent Infernal Dwarf kingdom of the Barren Mountains), many of which have preserved not only their lives, identity and language, but also many forms of dress and warfare which have elsewhere long since become outdated.

The region is fractious and warlike, with endless feuds, cattle raids and petty conflicts brewing between tribes and states. Here is a proposal for some tribes and statelets which could be found in and around the northwestern Barren Mountains, and on the northern peninsula, which could be a local Human strongpoint in a region not at all dominated by Humans. By no means an exhaustive list, this is more to get the ball rolling and hopefully flesh out more later on: 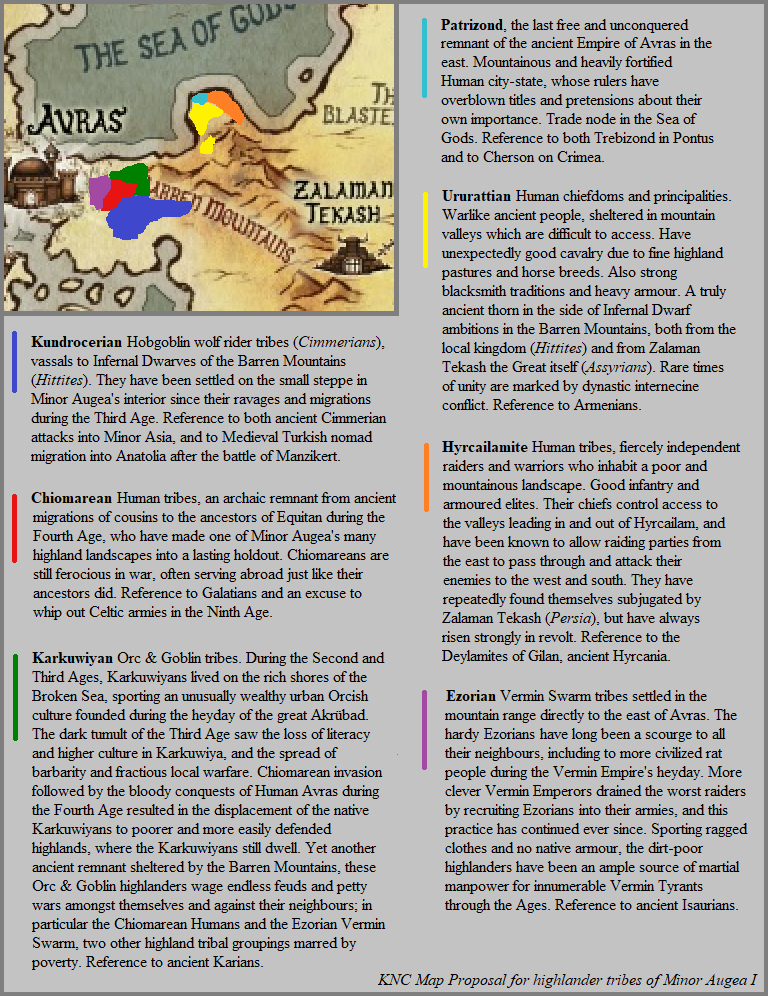 The three particular tribal groups from the northwestern Barren Mountains, depicted in the drawing up top, are the Human Chiomareans (T9A Galatians), Orc & Goblin Karkuwiyans (T9A Karians) and Vermin Swarm Ezorians (T9A Isaurians), who all have survived through the ravages of warlike ages in their respective mountainous landscapes, ever poor highlanders and martial raiders. At the very least they could be recycled for Fourth-Fifth Age duty, but the primary intent here is to spice up the Renaissance setting with more ancient and dark age stuff on the periphery (something which Warhammer Fantasy has too little of, brilliant as it otherwise is).

The Chiomarean Human tribes in this proposal are fantasy equivalents of the Galatians who migrated into Minor Asia after taking part of a lengthy bout of conquest and raiding through what is now the Balkans. These famously warlike Celts were employed as mercenaries in the Hellenistic successor states, and particularly so in Ptolemaic Egypt, which has been brilliantly illustrated by the late master Angus McBride. Being an ancient remnant sheltered in poor highlands, such Chiomareans could be an excuse for those wanting to whip out an ancient Celtic Human fantasy army in the Ninth Age (see de Witte's ongoing Albion marathon for Briton WHFB inspiration).

The Karkuwiyan Orc & Goblin tribes are in turn based on the Karians of southwestern Minor Asia. Greeks described Karians as inventors of vertical crested helmets (jocularly branding them as cocks) and the shield handles which the ancient Hellenes themselves used, as well as skilled metalworkers and weaponsmiths. The fractious Karians (possibly descendants of Luwians) once inhabited the rich coastlands at the Aegean Sea, but were pushed up into the mountains by Ionian settlers. Derided as typical barbarians by the Greeks, we can take the Karians and make an Orc & Goblin fantasy version of them. Indeed pushed out into the highlands, and with a richer past golden age to look back to, the Karkuwiyan remain fierce warriors and rather skilled craftsmen for making their instruments of war, especially so by Orc & Goblin standards. This is a chance to get some ancient Second Age (Bronze Age) flowering of Orc & Goblin high culture under Akrübad the great Orc into the setting's history, still hanging around up in the highlands as a tribal remnant.

The Ezorian Vermin Swarm tribes are in turn based on the Isaurian highlanders of southern Anatolia, who proved a raiding bandit nuisance to Roman Anatolia even through late antiquity. The Eastern Roman Empire in the 5th century risked becoming too dependant on Gothic manpower for its armies in the long wake of the disaster at Adrianople, yet emperor Leo I solved this issue by turning to the realm's native Isaurians instead (afterward, Illyria, and then Armenia provided the bulk of military manpower for Constantinople's Roman armies). Poor, warlike and used to harsh living like almost all highlanders, the Isaurian tribesmen were perfect recruits for the Eastern Roman army. Given the Byzantine link, it's a given that the Ezorians should be tribal and impoverished Vermin Swarm living on marginal land, happy to raid and ever a supply of martial manpower for Vermin Tyrants. Much of their dwellings and territory could be subterranean, but there are nevertheless always bounty and land to be had on the surface of the world as well.

There are a lot of colourful warlike peoples throughout history which are begging for a fantasy treatment in the most detailed historically based fantasy setting ever conceived to this day. The Ninth Age have the chance to grab them and make for a truly caleidoscopic patchwork setting, that will keep people coming back looking for more: More small-scale down-to-earth fiction (in comparison to more high-flying magitech settings), but also more over-the-top fantasy concepts rooted in history, folklore and mythology. My firm advice is that you grab the torch carried by Tolkien and Warhammer with a strong hand, and run much further with it than has ever been seen before.

Please share your ideas, comments and criticism for this quick background proposal, folks. 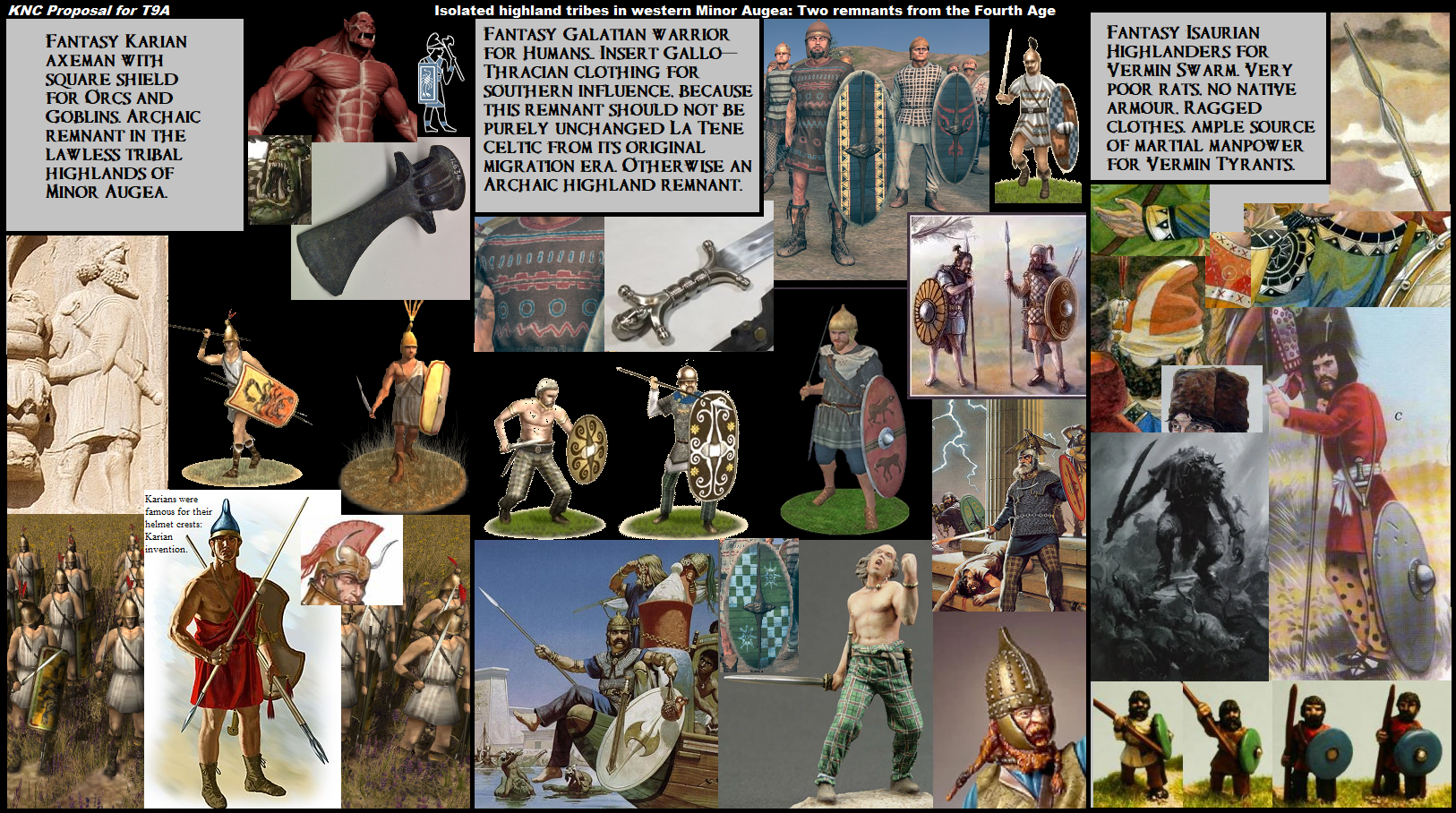