There has been a lot of brainstorming and homebrew development for the Ninth Age's version of the rich empires of Ghana, Mali and Songhai in West Africa, all ruled from the saddle by mighty warriors and slavers. This is one example of something that might have chafed for a community project to introduce into Warhammer Fantasy.

If you like the sounds of salt, gold, slaves and lordly riders, then check out the link above!

Some laidback smalltalk somewhere in western Taphria, in lands under the imperial reign of the Koghi, with a handy armrest for the brave warrior and dauntless slaver to lean on. 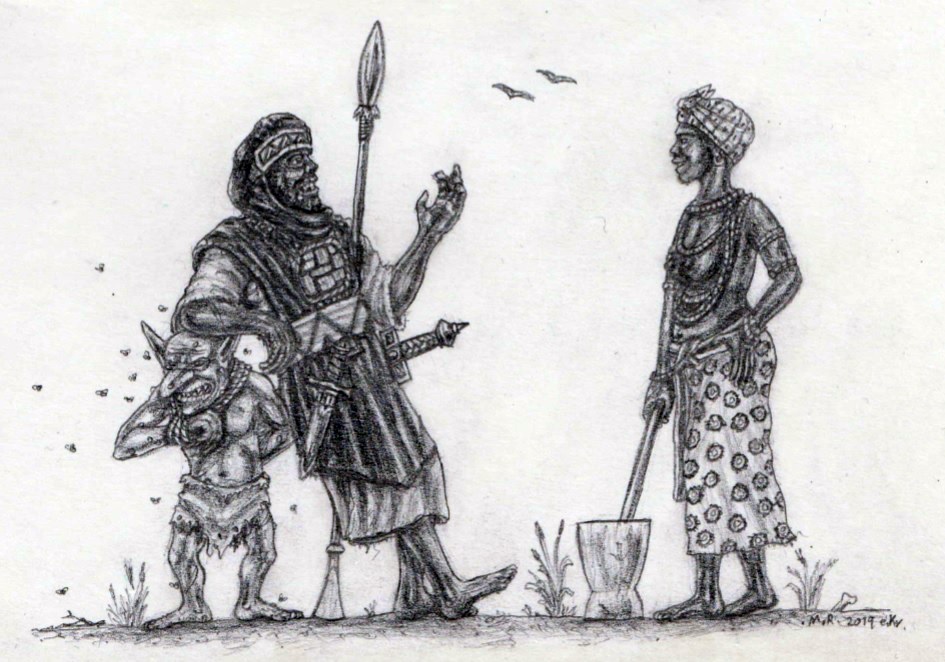 Please share ideas of your own for this great Southron power!

This is a commissioned illustration by Mitchell Nolte for Ghiznuk's story Return of the Koghi, featuring a fantasy Ghana empire for the historically based setting of the Ninth Age. For more brainstorming on the Koghi faction, see here.

« A big noise was heard from behind the trees. It grew louder, into the voices of many men, with the bellowing of beasts and the whining of horses. Young men came running to the chief, while the women deposited their jars on the ground and went in excitement in the direction from where the noise was coming, children following them, scaring dogs and chicken away. The whole village resounded with one echo, one chant : « Kooooghi ! Kooooghi ! Kooooghi w'o da ! Kooooghi w'o da ! »

Their leader came mounted on a fierce monoceros, a terrific beast with a huge, heavy horn like a tree trunk on its nose, sustained only by the beast's powerful neck. The animal was covered under a quilted pelt reinforced by leather patches and iron plates nailed directly into his powerful body, criss-crossed by strings of talismans and amulets, including worn out parchment covered in script. Sitting astride the monster's hunched back was a fierce-looking warchief, a kêlêtigi, carrying long iron swords on his side, as well as the beautifully carved bow that was the mark of his rank and status.

All the while the children were watching and singing around them, with the women and a growing crowd of curious villagers standing behind and around, looking either afraid or wondered, chatting excitedly among each other and clapping their hands in joy. »

Thanks for sharing that awesome picture!

Winds never stop blowing, Oceans are borderless. Get a ship and a crew, so the World will be ours! Today the World, tomorrow Nagg! {--|oBrotherhood of the Coast!o|--}
Top
Post Reply
2 posts • Page 1 of 1