These heads are out now! Order your Slave Orc heads here: Also on Etsy and on Blogspot. Priced at €9 per each kit of 12 heads upon release. Cast in whitemetal by Czech Custom Made Miniatures, who went to unusual lengths with the mould in order to preserve texture on the heads.

Size comparison, first picture of painted Orcs with bodies from other manufacturer provided by Bloodbeard, second such picture by Carcearion: 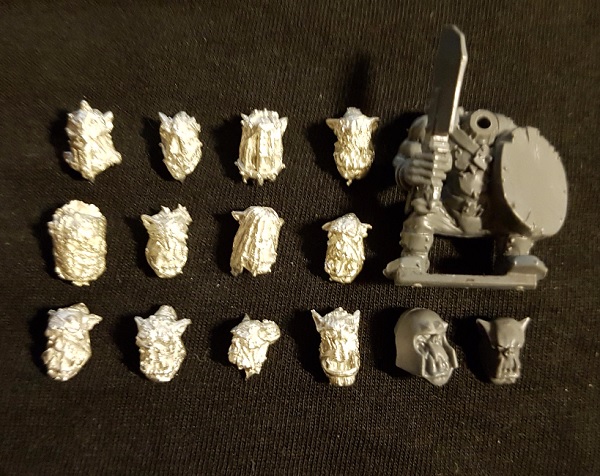 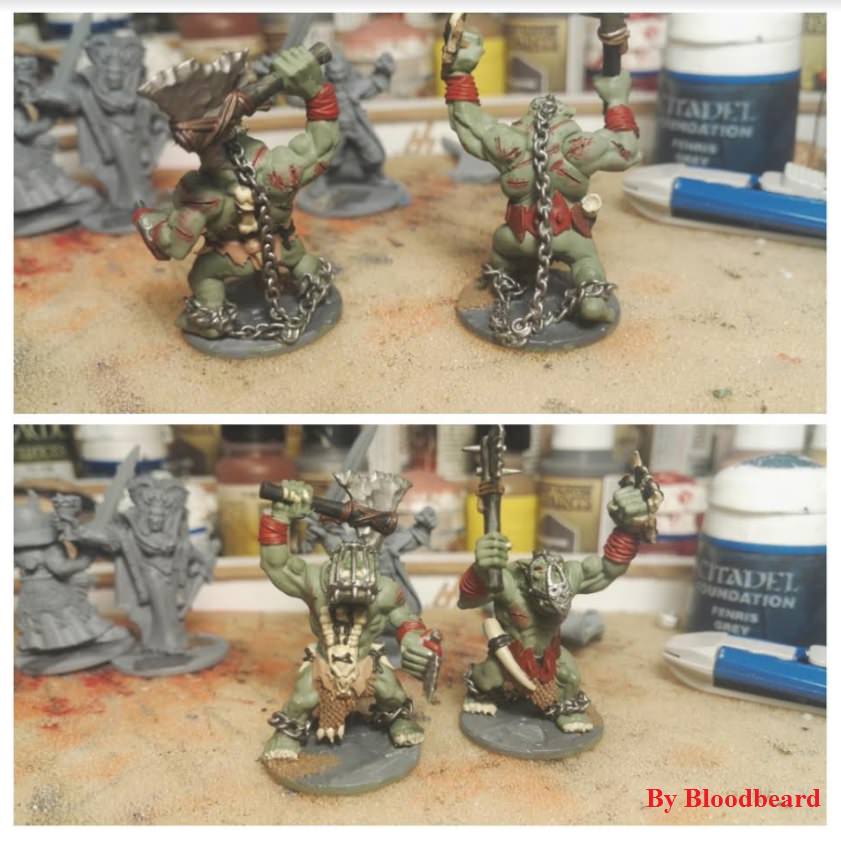 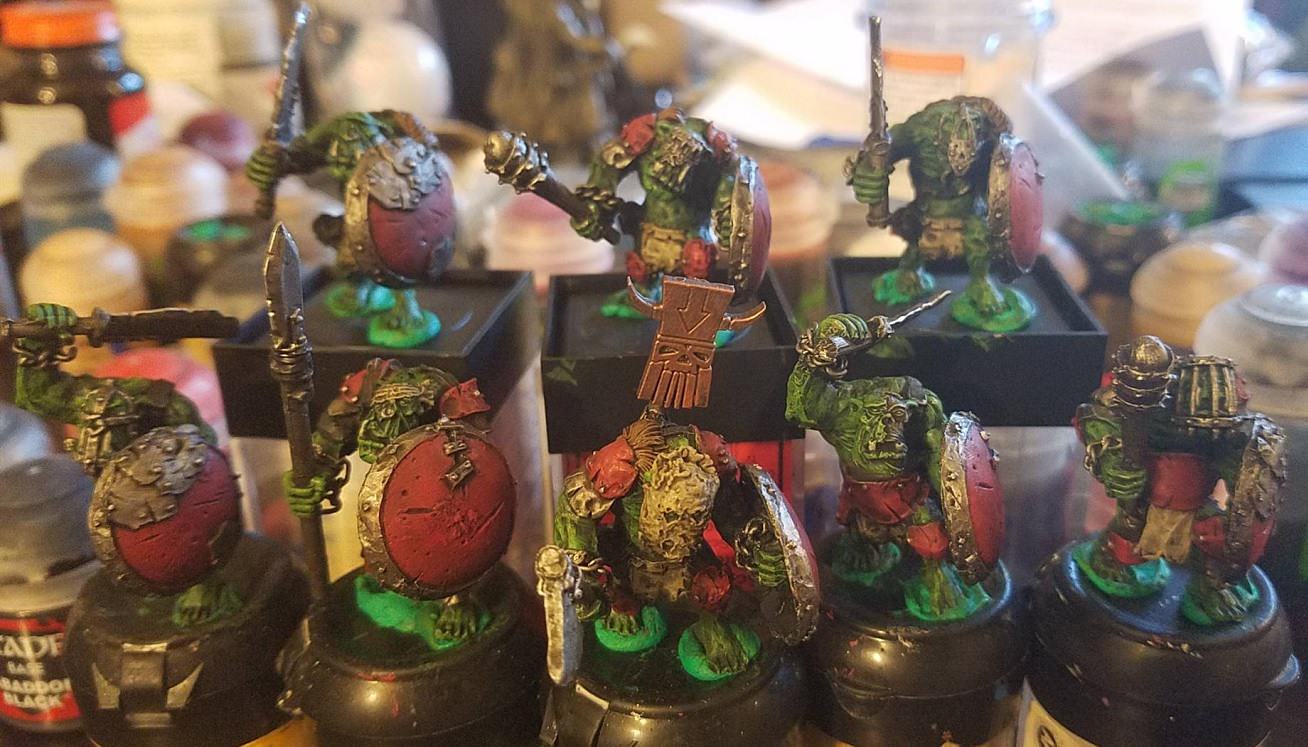 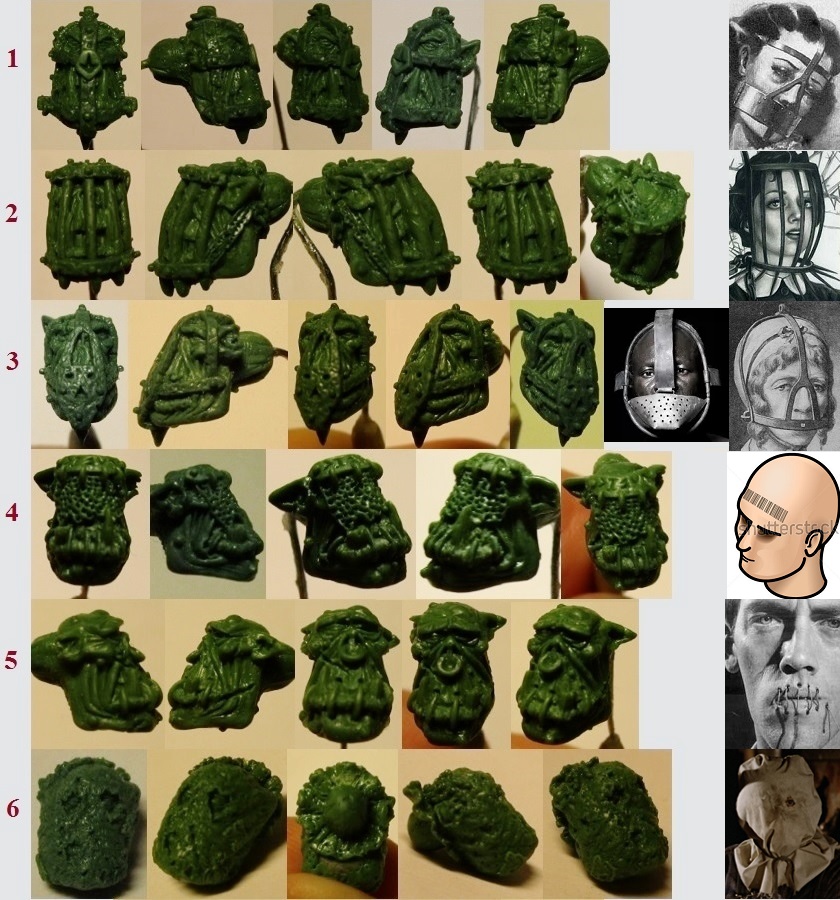 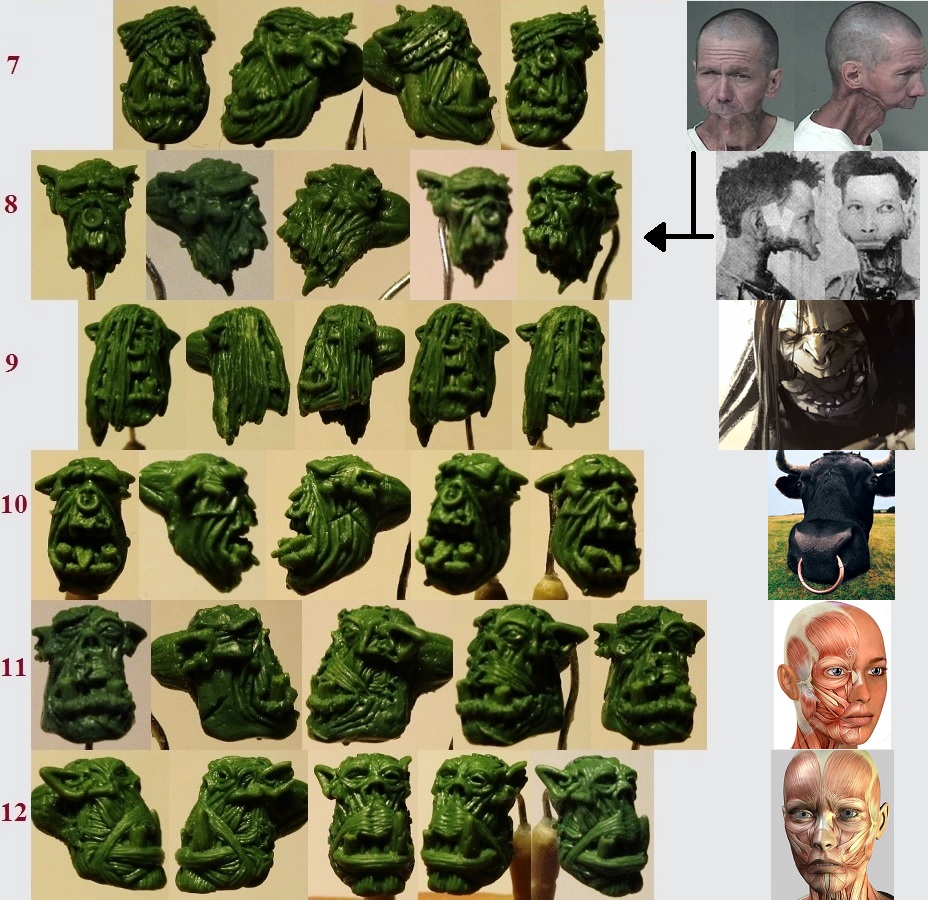 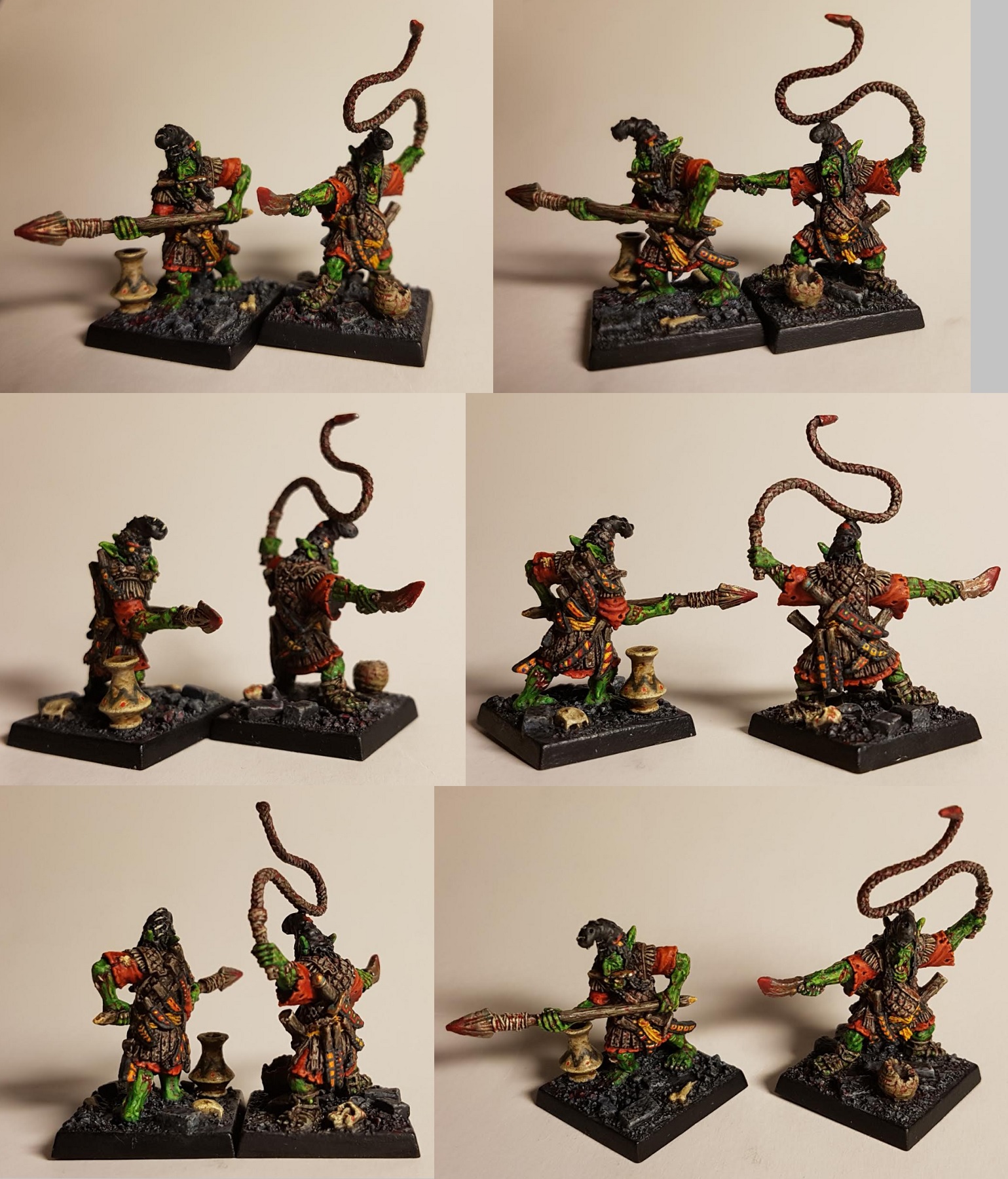 These scumbags are out now! Order your Slavedrivers here: Also on Etsy and on Blogspot. Priced at €9 per each kit of 2 Hobgoblins upon release. Cast in whitemetal by Czech Custom Made Miniatures. 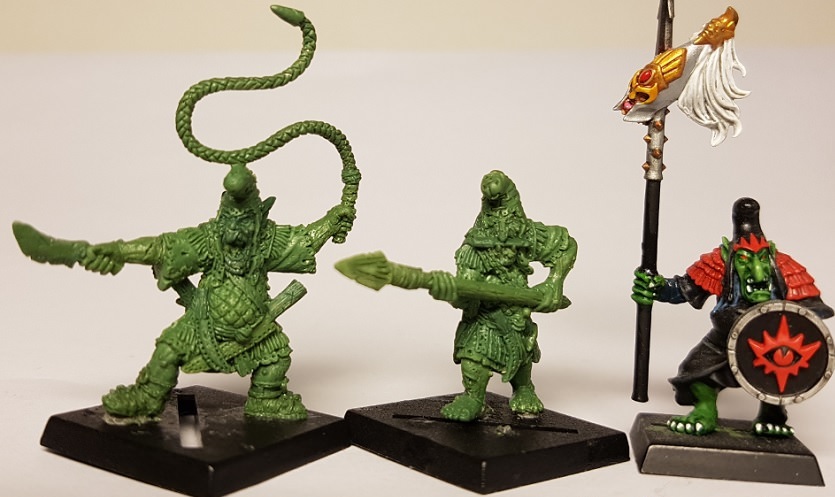 Scarred feet trundled across the ashen wastes to the constant rattle of chains. Many of those feet had less then their usual number of toes. On high, the sun glared hot and dry, its blistering gaze only interrupted by billowing volcanic plumes from a distant stretch of young mountains. The land was ruthless, and so were its inhabitants. A whip coiled through the dusty air and lashed, yet again, hard across lumbering green backs that quickly were becoming flayed to the bone. Hardly a whimper escaped from the captives. Skylxys Wartface was not content with the response, so he struck once more, but this time aimed the whip at a single bastard Orc. The iron tip of the long, braided lash bit into the raw, crimson mass which was all that was left of the sod's muscles that covered his exposed scapulae. Bloody droplets flew from the impact and the eternal cloud of flies scattered from the sudden violence.

This time, the lashing action got its deserved reply, and the hulking wretch stumbled to his knees and yelped in agony, grunting and panting. The hands of the Orc lost grip of his shovel and instead flew out sideways to cover his pained back, yet the shackles which bound the thrall's wrists together arrested the hands pathetically in mid-air. The sight bemused the grizzled Hobgoblin slavdriver, and Skylxus drank in the sight with all the glee that a weaker creature can muster at the utter subjugation of someone greater and stronger than himself.

“My, my. Me knees be damned if it isn't Qurluk the great himself who grovels in the dust,” snarled Skylxus with a leer that twisted his kife-cut face. He reeled in the whip and nonchalantly juggled with a fat knife in one hand, tossing and spinning it with disregard for his own fingers' health.

“Noo! Uh! NO!” wailed the slave Orc in protest. The high pitch was unbefitting for such a mighty creature, whose dark and gruff tones usually were the dread of settlers, nomads and beasts alike. Though the wretch's hands and feet between them only had enough digits for one full hand and one full foot, he scrambled to rise, knowing where such special attention from the overseers would land him.

A savage kick in the small of his back sent the large Orc grabbling to the ground, flying flat on his starved belly. That violence was sweet to Skylxus, and he wanted no one to miss his moment of supremacy.

“HALT! Hold yer steps you maggots, or I'll gut yer lousy skinbags and strangle you all with yer own intestines!” roared the Hobgoblin and planted his sandalled foot on Qurluk's messy back, pinning the brute more by fear than by weight.

The slavedriver's few colleagues dealt out strikes, prods, pinches, kicks and lashes and yelled at their slave flock to turn about and face the head whipper. As always, the sight of the measly gang of Hobgoblins with spears and whips lording it over the many more and much stronger Orcs was an offense to the order of things as set down by the gods who had shaped the world. The situation was surreal and unthinkable, had not those devil tribes of Ashen Dwarfs figured out ways to make the most unbending, proud and wild berzerkers in all of the inhabited world yield under their yoke. Of course, to break the spirit of something as strong and independent as an Orc required a degree of crushing brutality and cruel finesse that very nearly broke the body unto death, but the lardy stunted ones had figured out just the right balance, as was evident in the enslaved Orcs' starved, shackled, torn and mutilated bodies...

The miserable view of the slave Orc throng herded by the gangly Hobgoblins made Skylxus Wartface cackle with hoarse and rasping laughter. The imbecilles! Just look at their wretchedness!

“As I said, if ye had the sense to listen, this here on the ground is THE great Manstomper heeself,” spat the slavedriver and performed a theatrical mock bow to his audience. “Ladeez and gentle-Orcs, may I present to you the mighty warlord, the fear of Humans and Orcs alike and the thunder of the steppes? The cleaver of two thousand skulls and the ripper of tents. The drinker of blood, oh my! The puller of monster claws and the crusher of families, the one and only Orc king Qurluk!”

The other Hobgoblins sniggered and grinned between themselves. The watching Orcs stood dumb and lost in their shackles staring at the world from a little corner of their minds which their essence had retreated into when cruel oppressors wrecked their pride, their sanity and sense of self. Some drooled, some had jaws hanging slack from excessive blows, while some few sported no jaws at all after some punishment or capricious whim. Such a pathetic gaggle of broken ones hardly cared to see one of their own, and a leader at that, sprawled on the sand and gravel like a heap of filth. For filth he was, and so were they, and they wished nothing but to be left alone, caring not for others and being still alive only because the gods had made the will for life strong indeed in all mortals. Oh, the degradation on display was sweet like honey to Skylxus' red eyes.

“But is he truly your king?” asked the slavedriver harshly. The whistling of the wind, the snickering of Hobgoblins and the clink of chain links was the only answer. Skylxus set his whip and knife in his belt, bowed down and picked up a huge tool, holding it with trembling arms over his hat-crowned head.

“No! He is Shovel the slave, property of the Temple of Kardrunnak in Zuppar and part of canal-digging gang Fifty-Four! and this dungfly has dropped his tool. Bloody useless! Mayhap he has pretensions of royalty to distract himself? Could that be why Shovel forgets himself? How can you be Shovel without yer shovel?”

Upon raising this question, Skylxyus flicked the heavy tool down onto the head of once-Qurluk. The Orcish skull cracked audibly at the impact, and his head collapsed feebly to the ground.

“But let's be understanding for once, shall we? The mistake is easy to make. For Shovel do look like Qurluk the great, but this cannot be! Shovel is Shovel, and no more than a tool.”

The band of slave Orcs stood limply with hanging arms, blinking at the bewildering speech. The Hobgoblin slavedrivers, on the other hand, started to cackle among themselves. They were more clever than some dumb Orcs and caught that drift all right. All of them stepped forth, surrounding the lying slave on the ground, grabbing hold of him and turning him over so that all in attendance could see properly.

“Since Shovel's face is such a source of trouble, let us relieve the poor fellow,” barked Skylxus Wartface harshly and drew his thick knife with impatience. His companions tightened their grips on Shovel and produced his head for ease of reach. And then, in that savage act of flaying, did the stark utter cruelty on public display finally reach through the apathy of Qurluk's kinsfolk, and a glimmer of primal fear and recognition of their own brutish treatment struck a chord in the jaded hearts of broken slave Orcs. And they cringed and bayed and whimpered, not daring to move a foot unless they, too, would receive a similar treatment.

Yet the show was not over yet. When the slavedriver had finished carving into the weakly struggling head of Shovel, he grabbed hold of the skin and drew it off with both hands, planting a sandalled foot on the Orc's shoulder to brace himself. Blood glistened on the Hobgoblin as he raised the slack hide of Shovel's face to the skies and kicked the victim on his newly exposed face musculature.

“Haha! And now he'll eat it!” cackled the slavedriver, and forced once-warlord Qurluk to devour his own visage and so become one of the faceless mass of slaves who laboured under the cruel dominion of the Ashen Dwarfs and their sadistic middlemen. Life was short and unforgiving and you had to enjoy what triumphs you could before someone ended you.

Then the march went on as if nothing had happened.

And that night, near the site of overlord Hashdrubael's newly started irrigation canal, Skylxus Wartface slept very well indeed under his ragged blankets by the crackling campfire. 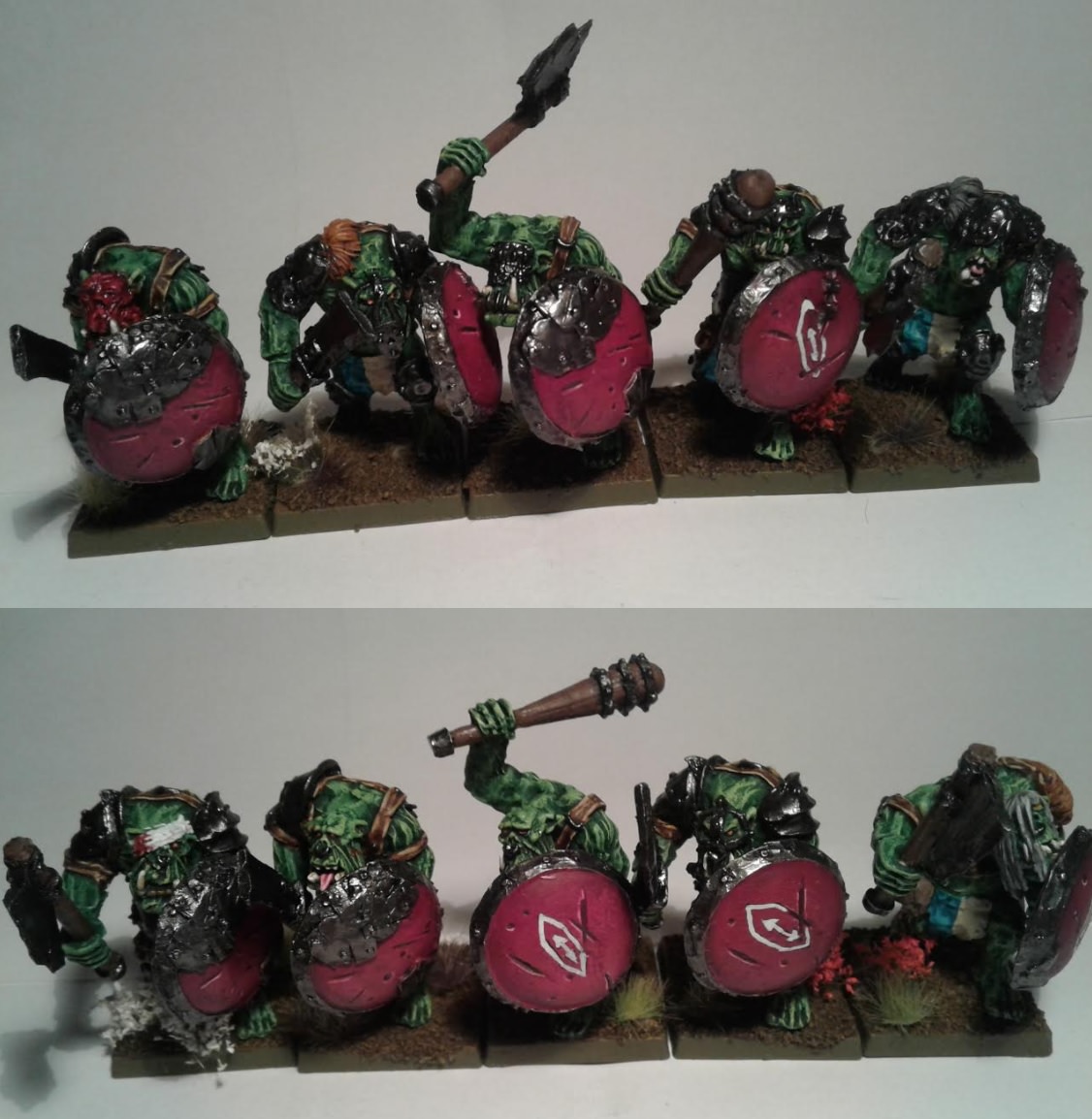 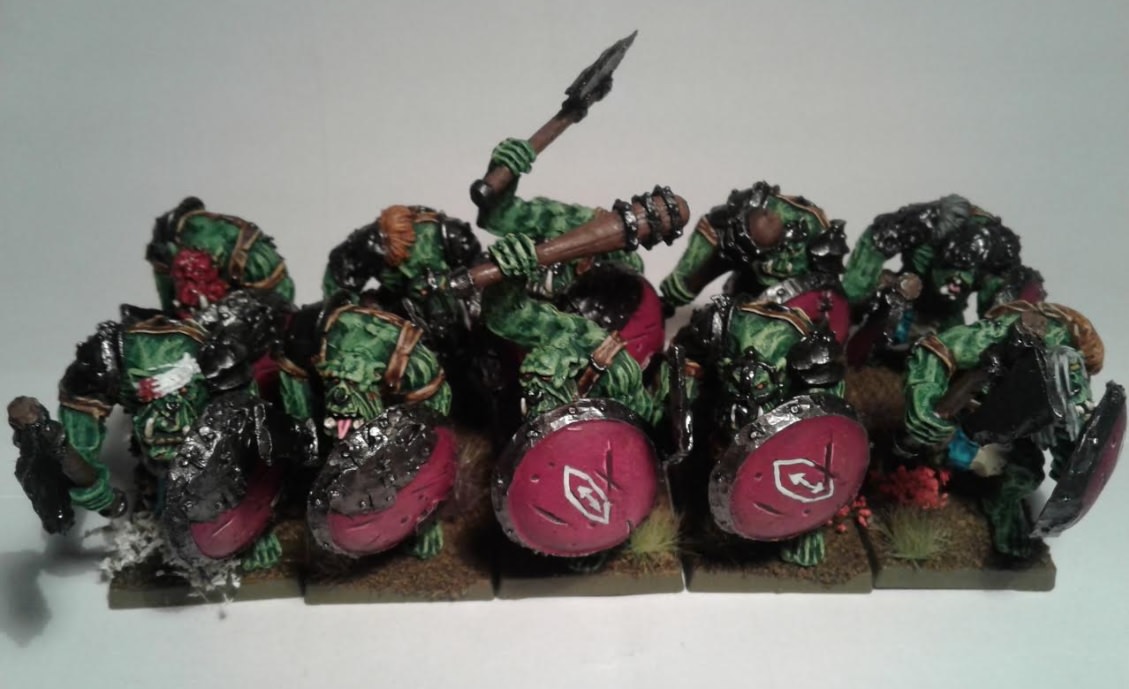