Discover the age-old techniques of painting...

Forum rules
Remember that picture file size should be no larger than 256KB.
For the full Painting and Modelling rules, visit [url]http://www.druchii.net/phpBB3/viewtopic.php?f=9&t=27440[/url]
Post Reply
29 posts

Shadowspite wrote:Looks lovely, DP! Terrain building is something I'm afraid I've never had the patience for. I'd always rather convert or paint more minis. Hell, I still have the old GW plastic fortress from (IIRC) 5th edition sitting unassembled and unpainted in a box somewhere. I keep meaning to turn it into a Chaos fortress with banners and skulls and bodies nailed to the walls and so on, but I never seem to find the time.

One of our gaming group has drawn up a detailed set of plans for a scratchbuilt version of the new GW Chaos Fortress (yeah you know - the one that costs nearly 700 quid, which is a hell of a lot of money for what is essentially a plastic toy castle), but I fear that I couldn't post them here as GW would get very unhappy and cause grief to the site admins so I'm not going to do it. Having said that, all he did was to download all the photos of the sprues from GW's site and then surfed the internet for photos of it assembled with other minis to work out the scale. In the end, he found this image; 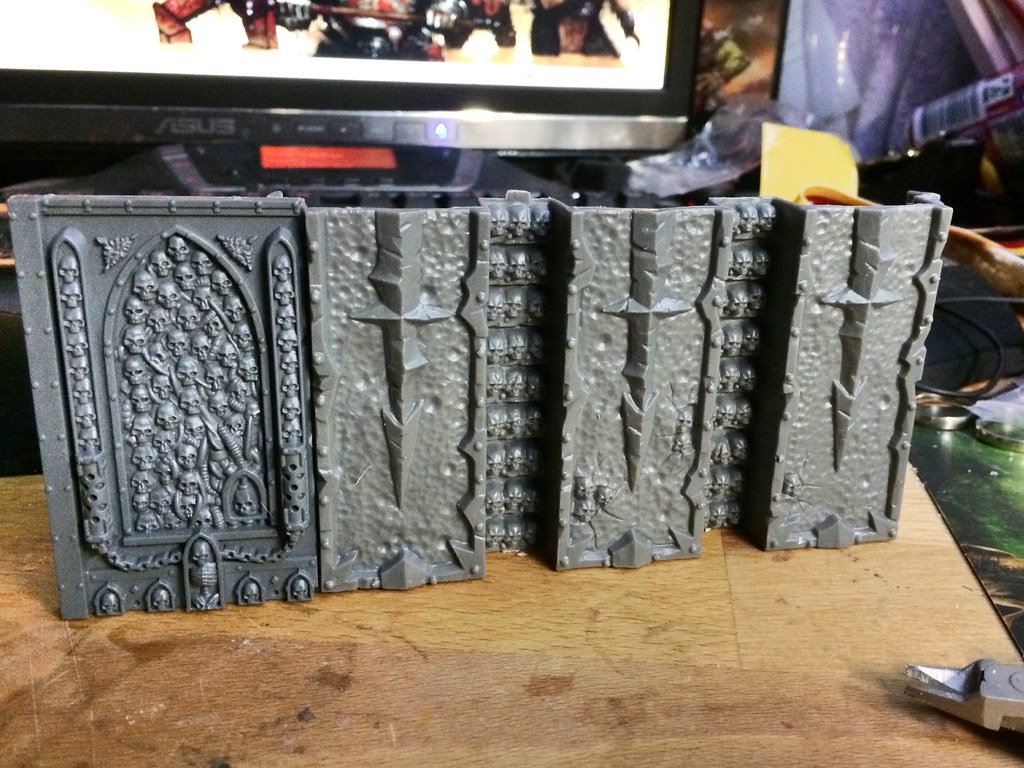 Which shows part of the Dreadhold wall alongside part of the 40K Cities of Death buildings - The point is that he has one of those pieces in his bits box so he was able to determine the scale of the Dreadhold part with very high accuracy. From there he was able to use the sprue photos to draw up the blueprints. Since the design is highly modular, this apparently turned out to be a fairly trivial exercise. Clever, and a big thank you to GW for making it possible by placing all the sprue photos on their website. We've all been downloading sprue photos of almost eveything on their site now, before they take them all down

Building the Dreadhold from scratch, even with an accurate set of plans, would still be a pretty massive undertaking, but at least it would be relatively cheap, depending on the method you use - Doing it in the same manner as the Mordheim table (ie. cardboard overlaid with printed textures) would be fairly quick, easy and very cheap, but if you're prepared to put in the extra time and effort, you could do a lot better by adding plastic or resin parts over the basic structure. As with all things, the end result will depend entirely on how much you put into it (although it'll still be a long way shy of 700 quid!)

Anyway, getting back to the Mordheim table, the section I'm building at the moment is 24" long by about 9" wide (though that will be added to - the ideal size would be that each table section should be exact multiples of 12" in order to effectively make it a modular assembly - although technically it will only go together one way in any case)

Since this is based on the Town level of Painkiller, we have had to alter that map layout somewhat in order to get it to fit on a normal gaming table. If we were to build it according to the plan in the game, the whole thing would need a table about 8 feet long by 5 feet wide - highly impractical - so we are rearranging the layout of the various sections in order to fit it onto a 6x4 table (if we're really lucky, we'll get it down to 4x4, but that's less likely, as we're having to build it in a way where the streets are actually a good bit wider than they are in the game, otherwise they would be too narrow to be able to get your hands in there to move the minis around. Time will tell how well this all plays out but it's looking good so far. I hope to get my section finished by next week (with a bit of luck) and hopefully on the weekend I'll get to see one of the sections that another of our group has been working on - there are five of us working on this table right now, and there are nine discrete sections to be built, so it's still going to take a good bit of time. Only two of us are actually doing the full texturing and detailing work - the other three are just building cardboard structures for us to do the finishing on, so that shouldn't take too long. The hardest bit is having different people working on different sections that all have to join together neatly - that's going to be the toughest part, but as long as everybody follows the template, we should be good...

I'll be posting more photos as soon as I have them...
The Dark Princess
High Priestess of the Cult Of Pleasure

I had a play making similar walls using basic Silicon moulds I took from the fortress walls and filling them with PVA glue - works quite well for brick work. It might be good for your castle walls.

You can bend the PVA around shapes (like a pringles box)
http://www.cultofkhaine.com

Cultofkhaine wrote:I had a play making similar walls using basic Silicon moulds I took from the fortress walls and filling them with PVA glue - works quite well for brick work. It might be good for your castle walls.

You can bend the PVA around shapes (like a pringles box)

Do you need to add anything to the PVA before pouring it into the moulds? I would imagine that it would need something to stiffen it a bit, yes?
The Dark Princess
High Priestess of the Cult Of Pleasure

@Darkprincess
Nah just pour it on really thick - it can take a couple of days to dry (go milky clear) then you just peel it off the mould. Real easy to to and very effective. It might require a couple of layers to build it up.
http://www.cultofkhaine.com

Return to “Painting and Modelling”