Welcome to the home of the Dark Elves
https://www.druchii.net/phpBB3/

by cultofkhaine
Hi all - I was just lucky enough to find and win this amazing model below and it got me thinking (I have always wanted to do this) about creating a Drow themed warhammer army.

I have seen several threads on this forum over the years about others doing a similar thing but have never seen a finished army. As I have just finished 2500pts dwarfs I'm now looking at doing a new DE army and I think something like this might be a challenge.

Thoughts for the army so far...


Does anyone have some ideas they could contribute... feel free to post images I have been able to find very little.

by Amboadine
That is a hell of a challenge you have set yourself. I like the idea and the use of crystal features as basing.

I guess you could look at doing some sort of conversion from the goblin spider riders, not sure on how the sizing would look though. Might dig out a couple of spiders to have a look.

There is also the giant spider model from the goblin range that could be used either as a monster or monstrous mount, as it is fairly large.

Let me know if you want any size comparisons, I have goblin models kicking around.

by Dragon9
The basing part shouldn't be too difficult. GW sells a basing kit for underground that has crystals, stalagmites, etc.

by cultofkhaine
@Dragon9 Thanks for the tip - I did not realise they had a specific basing kit, it looks good and just what I am after!

@Amboadine - yes I was thinking goblin spiders and the big spider both to feature, size comparisons should be fine I have seen both.

My biggest challenge is to match up units between the two genres' - I want to use the DE army for the army list but sub in units from the Drow culture.

I need ideas for what type of units it should be based on. Im working on the army list at the moment and will post shortly.


read all books on drizzt du'rden

u could even use coldone knights if you want.
use salamanders from lizzmen as mount. skip the backcomb.
and put knights on them., since drow use a lizzard that can run in the roof.

i get back when i find my notes on how i wanted to do it ;-)

by Dyvim tvar
I saw a drow-themed dark elf army once and it was pretty cool. I don't remember much about it other than Driders for Dark Riders.

This is where you could run into problems. Dark skin is REALLY hard to do and have it look good. If you try to do it black, you'll just end up obscuring all facial details.

The trick is to choose a medium-dark color and highlight up from there. The model in the picture is a really good example of how to do this well. It FEELS dark since it is a purple tone, but it isn't very dark in reality. Rather than go for truly dark skin, I would try to replicate the skin of the model in the pic.

by Rowena
Reaper does some models that could be used for Driders as well as some spiders. http://www.reapermini.com/OnlineStore/s ... test/page1
This could look really great, please keep us posted about your progress.

by Dalamar
My army used to have Driders for Dark Riders, you may have seen them last Buckeye Dyvim...

This year my driders are getting re-converted into warlocks.

But Beholder I haven't thought of... it will make a perfect medusa replacement!

by cultofkhaine
Ok so have been doing some further research and this is the 2000pts army list I am considering based on the Drow fluff I have read so far.


CHARACTERISTICS OF THE ARMY

The Militant Myrlochar, sometimes known as the Order of Soul Spiders, was an elite fighting organization comprised exclusively of crusader males and found in the dark elven cities where Lolth was worshiped and males are allowed entrance into her priesthood. The Militant Myrlochar directly serviced the regnant Matron Mothers of the city where they were sited as workers of irrepressible chaos.

I am thinking of highly converted or non GW models from other suppliers for the army. The theme of the army is heavily based on the fluff of the Drow from the forgotten realms.

Let me know what you think ... my mission now is to start tracking down models to fill in the units with.

by cultofkhaine
@Rowena - thanks for the links some great models there. I have seen some of them before but did not realise there was such as large collection of them. I will most definitely post progress of this army.

@Melle - yes was thinking of using goblin spiders and Doomfire Warlocks for the uppersection, have not seen this done before. drizzt du'rden is a legend and my soul inspiration for doing this army, those books were great!!

@Dalamar feel free to post some pictures would love to see your conversions.

by Melle
hehe. ive been wanting to do a dwarf army with king bruenor battlehammer, drizzt, wulfgar,regis,guenwyvar abd catie-brie in it for years but struggle how to represent the heroes other than as unit fillers.

anyways, back on drows.
illithids could maybe be used too to some extent. maybe as warlocks. they do hover and are mentalists.

old book would be better due to whip of agony on a priestess of lolth;-)

zaknafein could be a nice ahw assassin.

by cultofkhaine
Some inspiration for colour schemes. If I can get mine looking like this I will be v.happy. 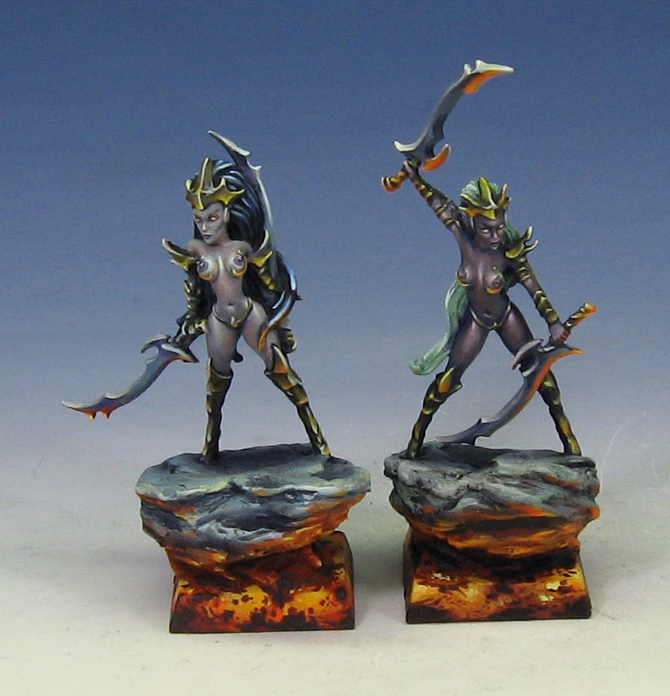 by Amboadine
Nice inspiration. That skin tone is beautifully done.

by Dalamar
I think the highlights are too strong... They're more everquest dark elves than drow... I figured out a simple technique that I think works great... But am currently lacking minis with large areas of skin to show off that are fully painted <.< not for long though! I will soon be the owner of over 50 witch elves

by T.D.
Drow themed armies are not my personal cup of cha..

...but if you manage to make them look like the 'inspirational colour schemes' posted above then you'll have a stunning army!

by Dalamar
I'm debating right now adding a mind flayer as a shadow mage... he comes in a kit with a nice beholder which will be my medusa. (And I might get a purple worm for a kharibdyss!)

by Silvershadow
I've been slowly amassing models for something like this myself, looking forward to seeing what you come up with

For me, the Arachnarok will be a Cauldron replacement - the base is 100mm wide, but looking at the model I think I can squeeze in a line of 20mm models on each side of the actual spider on top of the base and between the legs of the spider. If nothing else, I'll have fun trying

Like you, I picked up a bunch of goblin spider riders and I got some actual drider models, though the drider models I've found so far mostly tend to end up fitting more on a 40mm or 50mm wide base rather than a 25mm wide cavalry base so that's a bit of a problem. The spider rider models already have a head so I was thinking of just using those as mounts rather than trying to convert them into driders like you proposed but I am very interested in seeing how you do with that idea.

And since you mention the Drizzt books as your inspiration, don't forget that lizard mounts are an option also.

I think the spider will be a giant Jade construct... I feel like having the entire contraption strapped onto a real live spider would mean a lot of turbulence up there.

Also, while my drow are drow... they are not dnd drow. There is no Lolth in Warhammer, my Drow worship Atharti and Hekarti.
There is a hint of an ancient, lost civilization found in the depths of the underway, and I am using it as a wide open door for creative licensing and in my fluff it will be remnant of a once powerful civilization resembling DnD Mind Flayers that was overran by skaven (they were completely overwhelmed etc etc.) There are also other unknown creatures to be found underground and Beholders will make an appearance as my medusa for example. I wonder if I can find a use for Umber Hulks as well... hmm...
Not to mention I have a unit of driders that work as Dark Riders (D.Riders... yeah, punny) but will be re-converted into my warlocks.

As for the typical drow lizard mount - if you can find a basilisk model that would be to a scale that cold one knight can ride... they would be perfect! But I like my cold one knights too much to convert them.

by Melle
nice use of nerah and the AoW dark elf warrior.
my nerah got to be a vampire but the executioness is waiting paint so she can be captain of the executioners. really like the kabuki range. too bad they slightly to big.

about umber hulks. someone over at bugmans made a duergar army, with umbers he converted quite skillfully from 40k stuff i think.
of course cant find the link now...

by Dalamar
Kabuki are a bit bigger... but the scale is actually the same if that makes sense. I took some measurements comparing her to the Death Hag that comes with the cauldron/shrine kit.
From shoulders to hips - they're the same.
Nerah's head is a tiiiiny bit bigger
Nerah's legs are significantly looooooonger.
And on top of that Nerah is in a stretched leaping pose adding to the scale difference.

GW may be officially making minis in the 28mm range... but if you look closely they're closer to 30mm in many cases now.

by cultofkhaine
Thanks everyone for the posting there is some great material here for further inspiration.

@Dalamar that's quite an impressive cauldron and a great use of the spider.

Does anyone have any further ideas for unit types or characters that could be included in the army?

by Dalamar
The howdah thingy is still in planning stages... I think I will modify the front platform a bit and move the back platform more over the spider (yes, there's a back platform too being the cauldron

by Melle
maybe use chariot as platform?
tombkings could work too if DE is too big?

i suggested illithid earlier, then it struck me they be same as dalamars mindflayers. shadow beeing optimal choice.


incorporate jarlaxle and you can go mental on allies. not to mention, he's bald :-)

though I still have the new cold one chariot sides that I can use on the lower platform.

And since drizzt was mentioned... he's a disgrace to all the drow and an example of bad writing especially in the first three books. He *has to* survive against all odds... but salvatore writes like the rules of drow society ddont apply to drizzt.

by Melle
ahhh, but first he is blessed by lolth....then cursed, and somewhat blessed again due to the spiderqueens chaotic nature.

not to mention the subtle protection from zaknafein early years;-)

but i agree, he endures too much and gets away with it alive too many times...


on my link last post, he also builds a mindflayer(chaos sorc and genestealer head) and a beholder a few pages forward
All times are UTC
Page 1 of 6